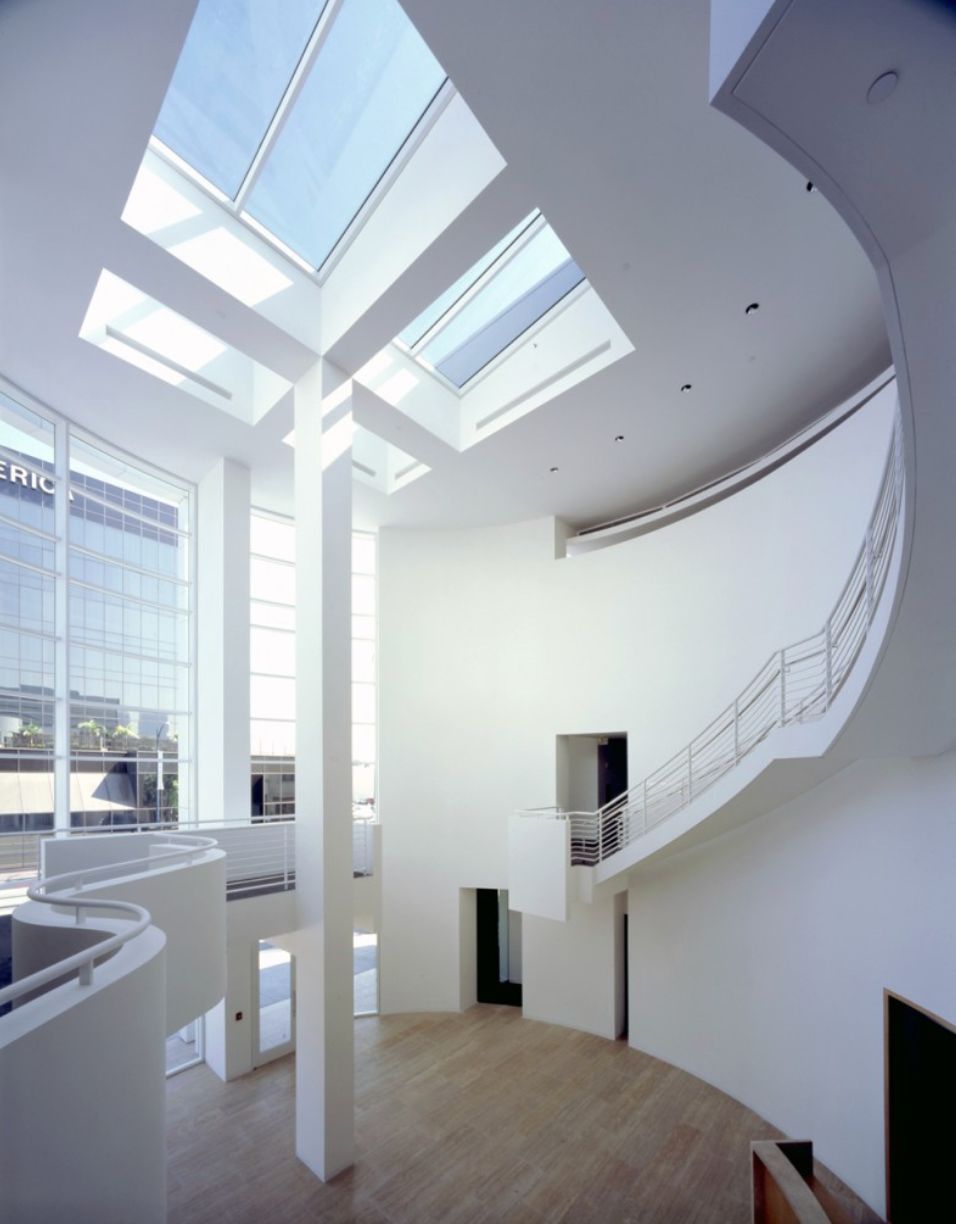 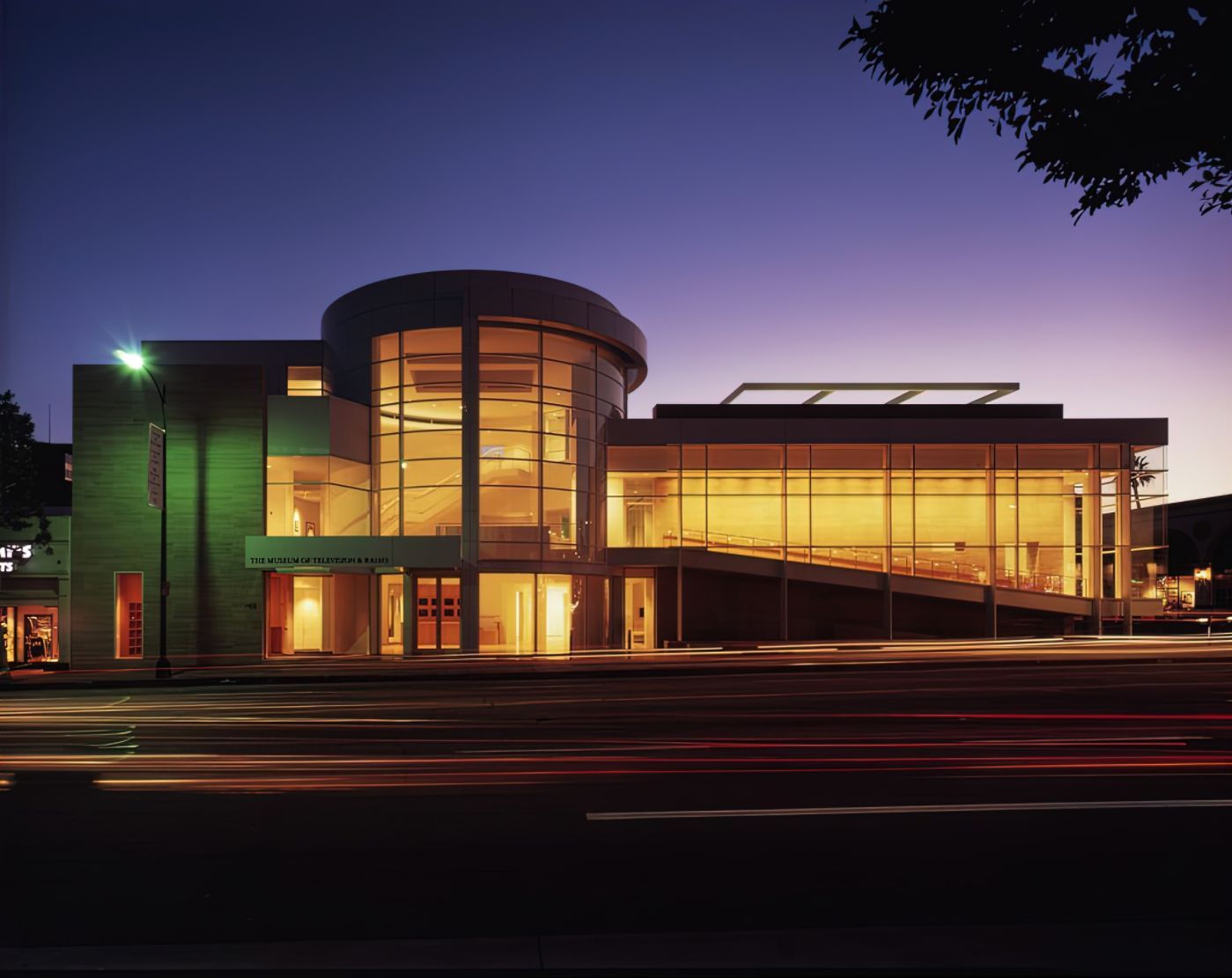 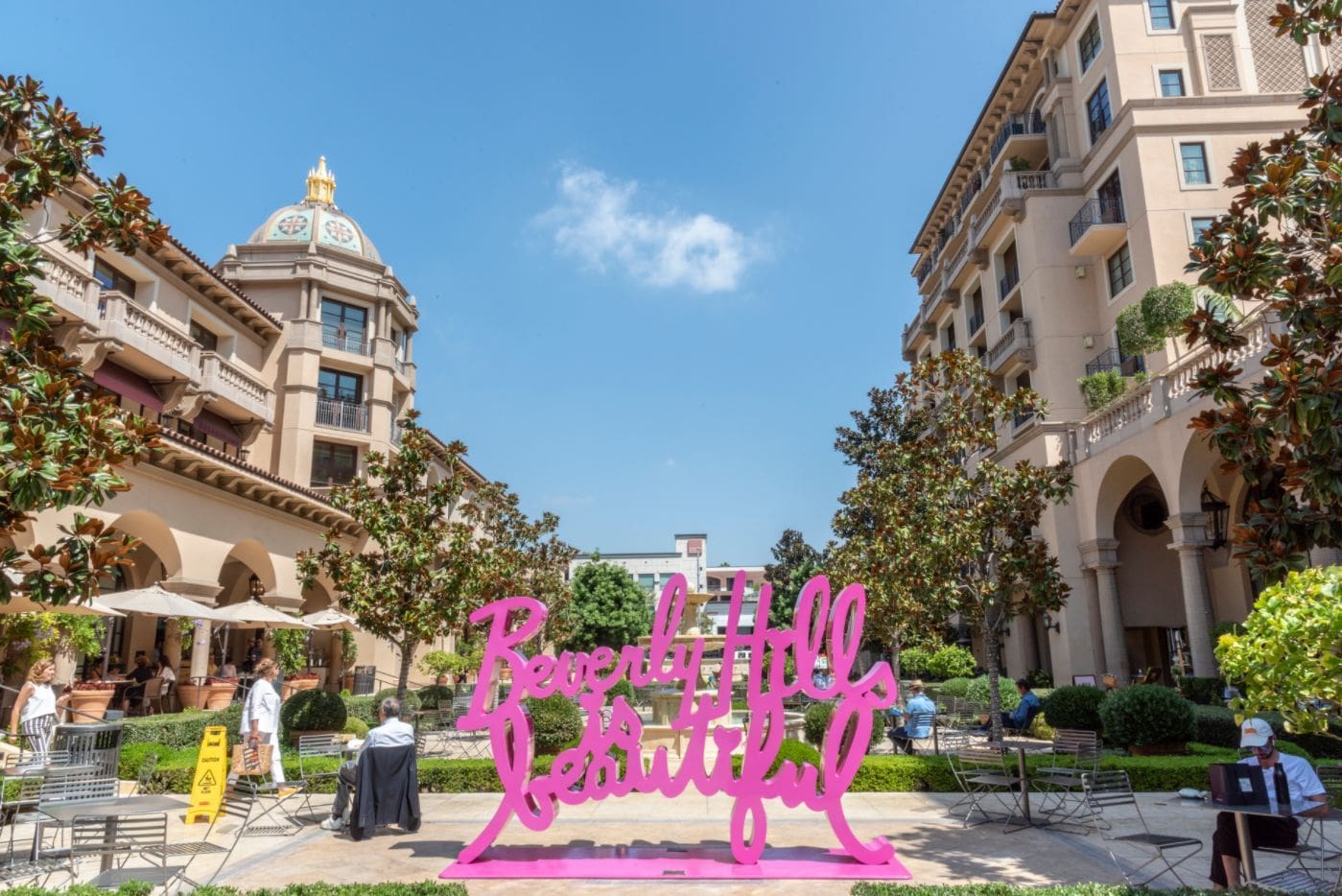 1990s Beverly Hills, California. The community of communities. Dreamers longed to join, and the rich and famous showed them exactly why. The best stores, the best restaurants, the best houses. No matter the medium, Beverly Hills did it best. It was the place to be. Immortalized on the silver screen in iconic films such as Beverly Hills Cop, Pretty Woman, Clueless, and on the small screen in the cult obsession Beverly Hills 90210. Residents of this pinnacle Beverly Hills society revered the city as their personal haven, diligently protecting its every aspect – from schools and parks to restaurants and museums.

The Paley Center for Media, also known as the Museum of Television and Radio, opened its doors in 1996 to an eager, inviting, and prospering Beverly Hills community. The museum was beautifully designed by American artist and architect, Richard Meier, making the building itself a true work of art. One that the city was proud to keep under its protective umbrella.

Beverly Hills continued to boom throughout the new millennium, sometimes more ambitiously than anticipated. All its gleaming prospects cultivated a new generation filled with aspirations, and soon young entrepreneurs and creatives of all types began to arrive in droves. By 2017, LA County opened a new subway line that enabled anybody and everybody to come to Beverly Hills whenever they desired.

After 20 years of residency, the time finally seemed right for the Paley Center of Media to embrace change and adapt to its growing environment. Artiste extraordinaire Thierry Guetta, aka Mr. Brainwash, acquired the museum to develop it into a vibrant exhibit of his own works and those of other artists whom he admires – similar to his 2018 New York City pop-up exhibit which included paintings, sculptures and multi-media displays “brainwashed” with his signature uplifting commentary, historical imagery, and cornucopia of color. 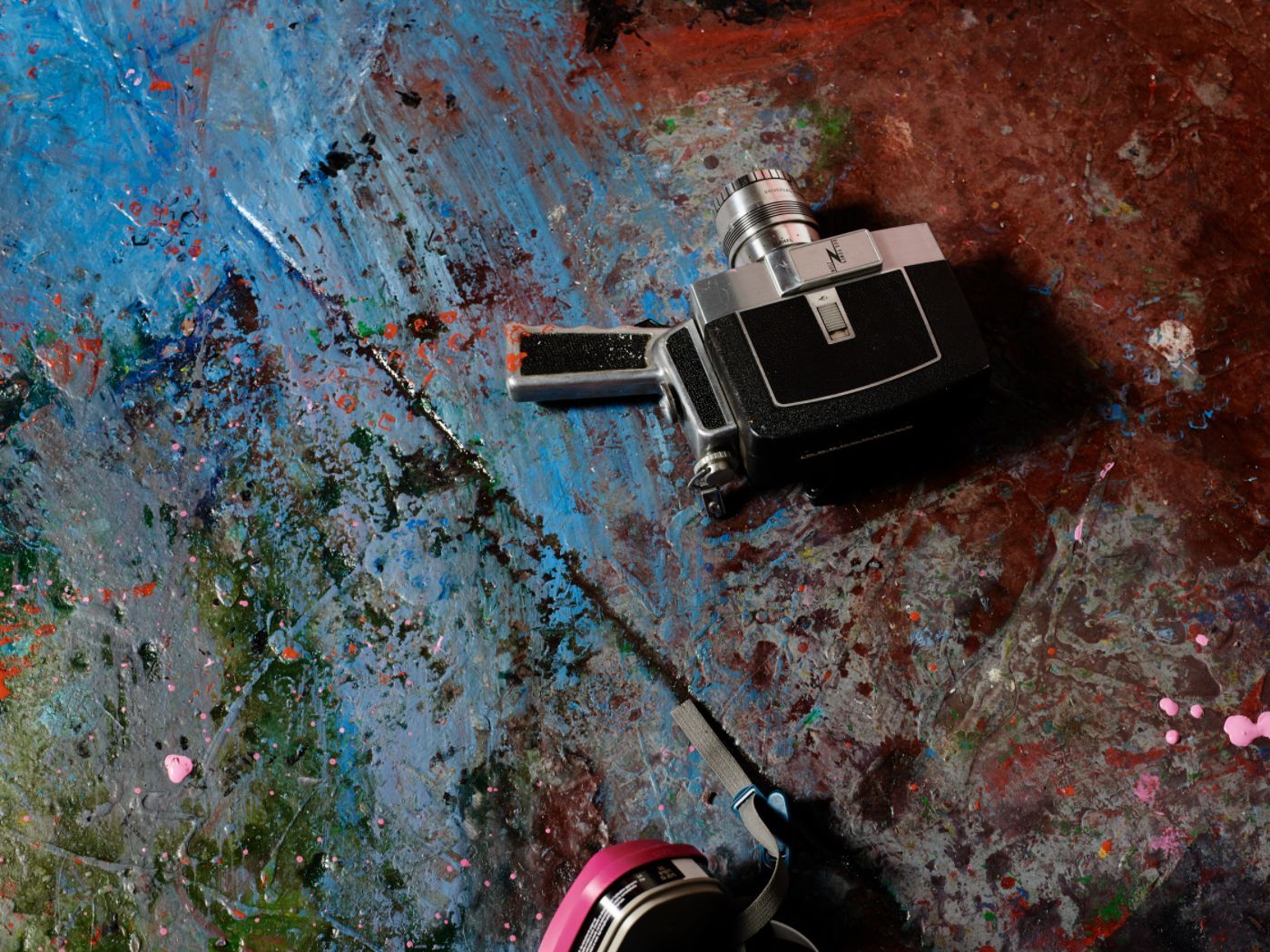 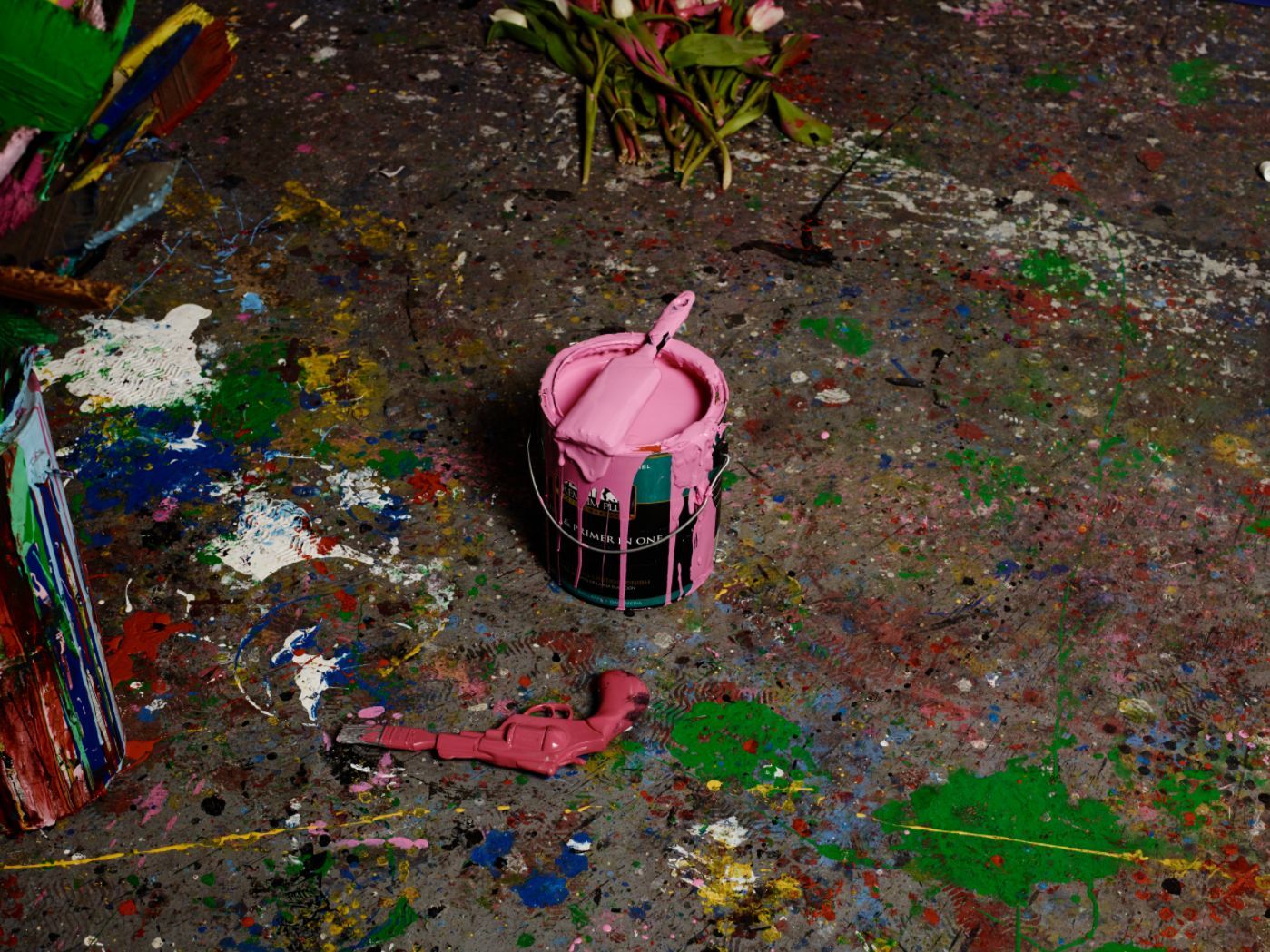 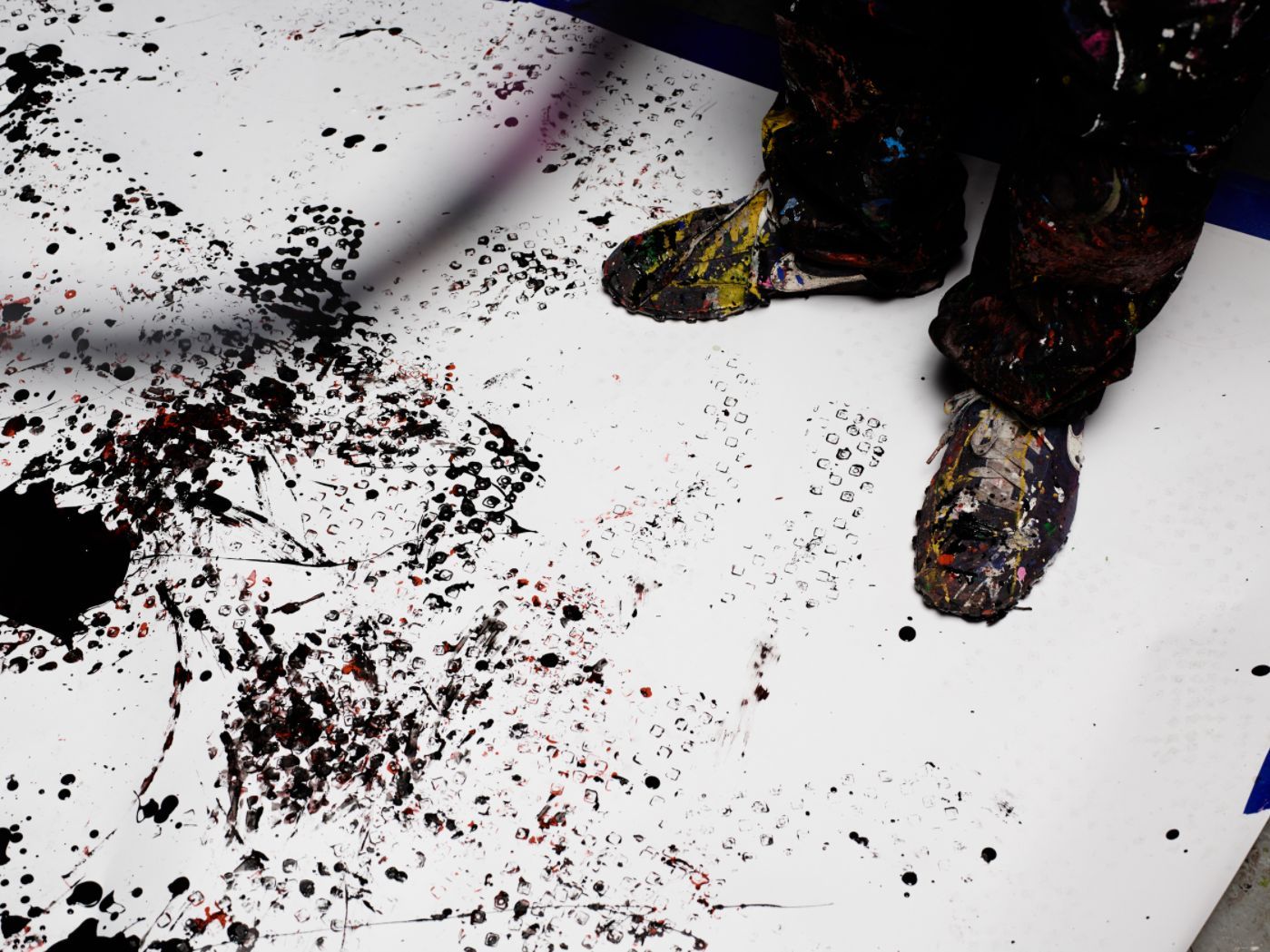 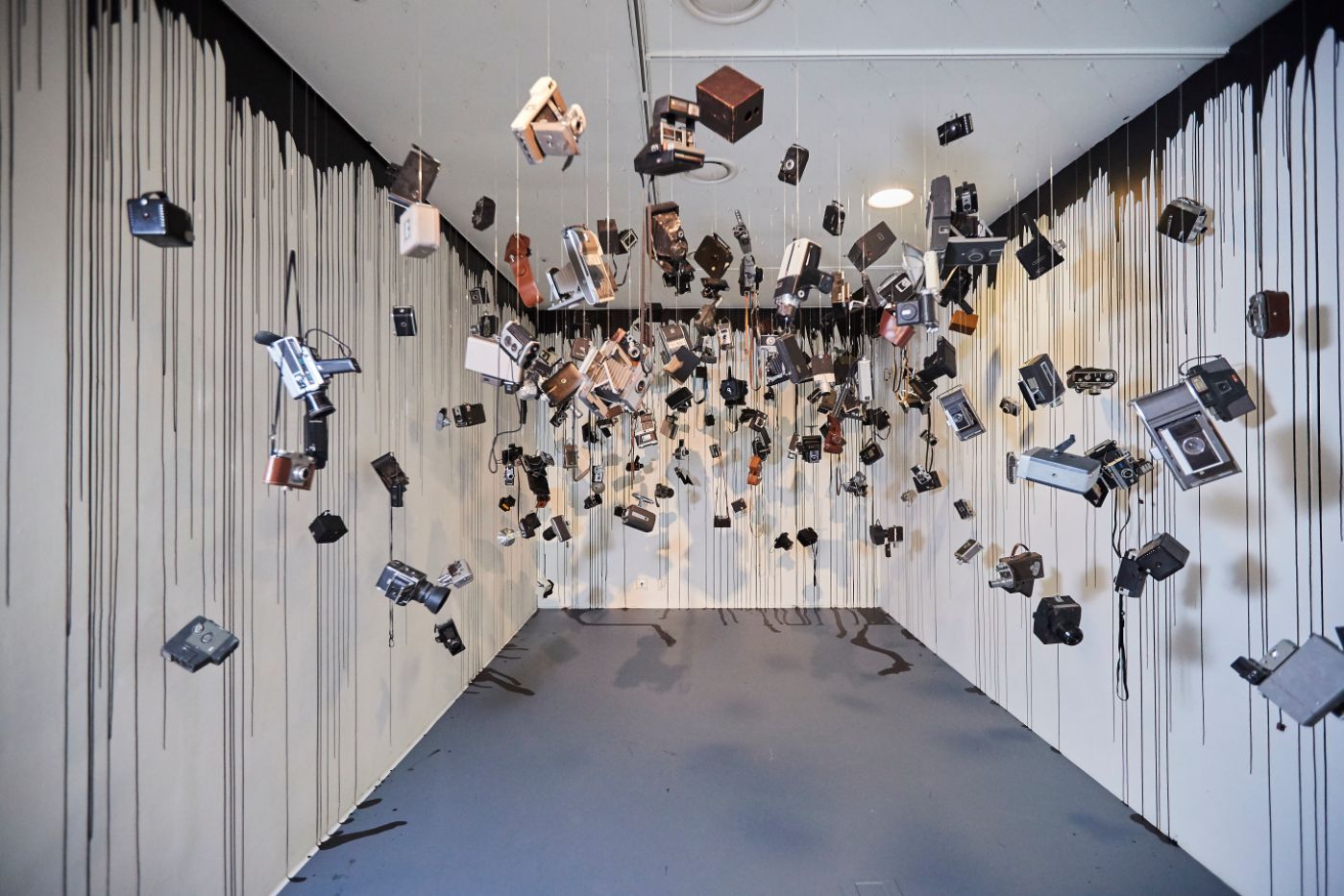 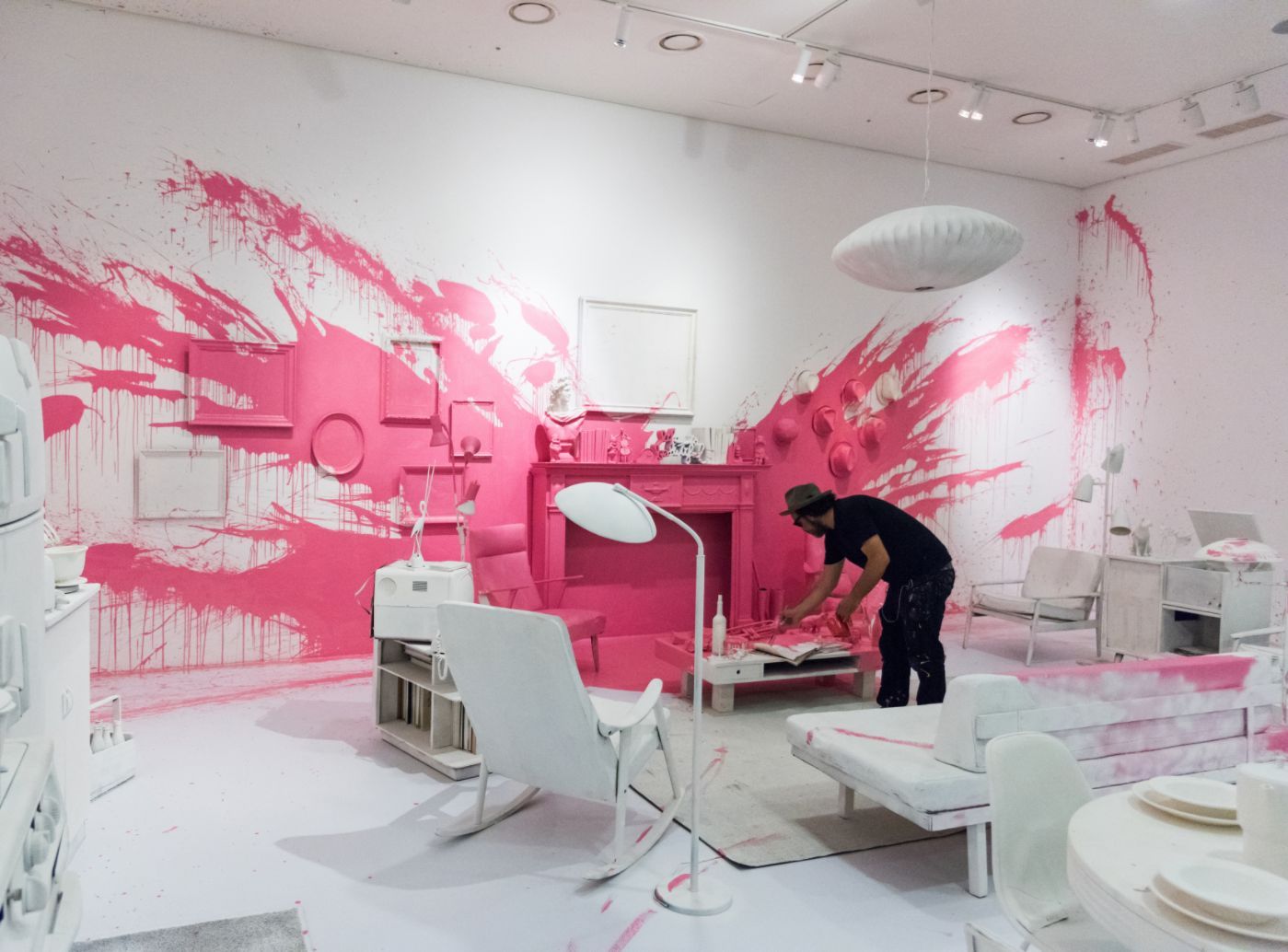 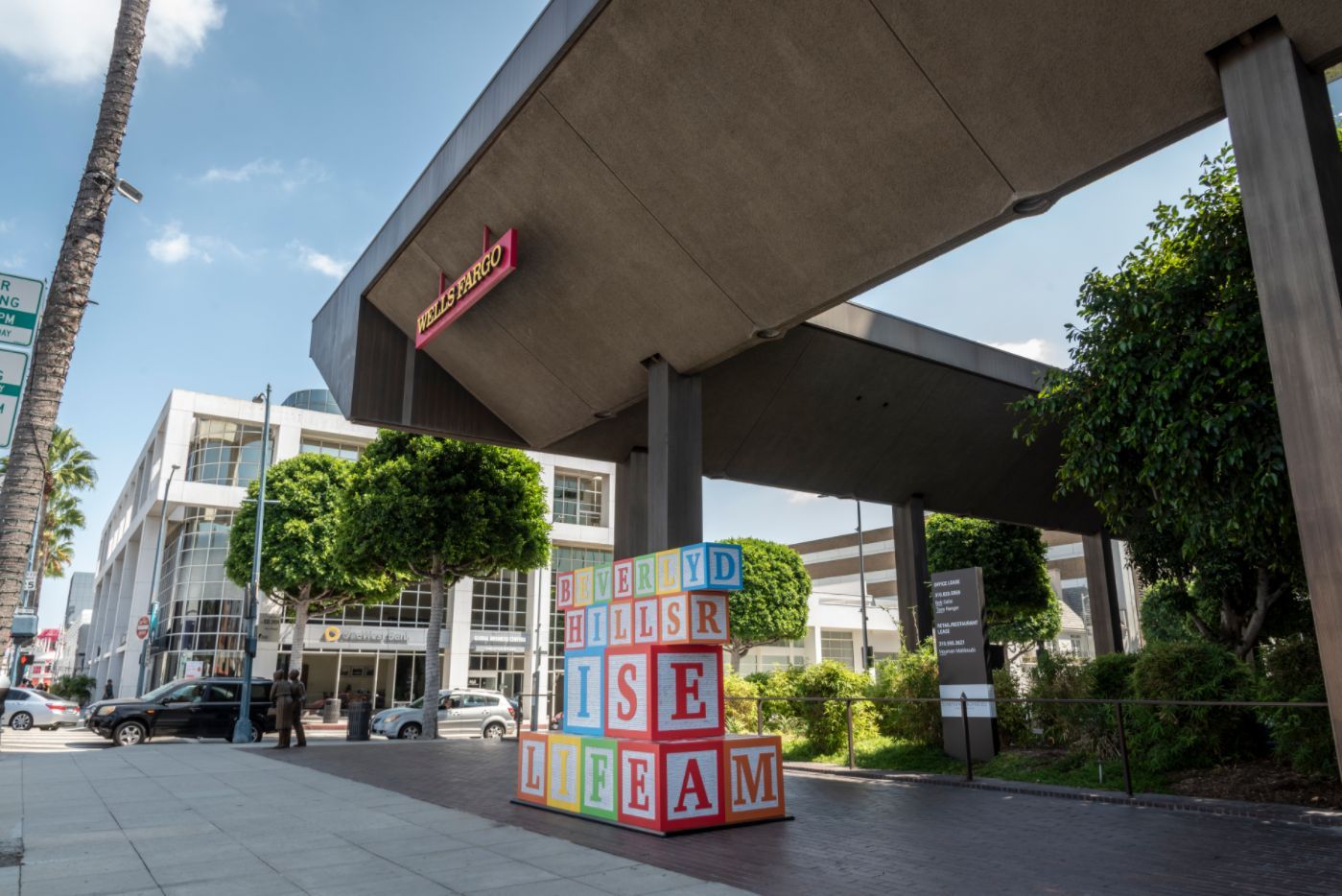 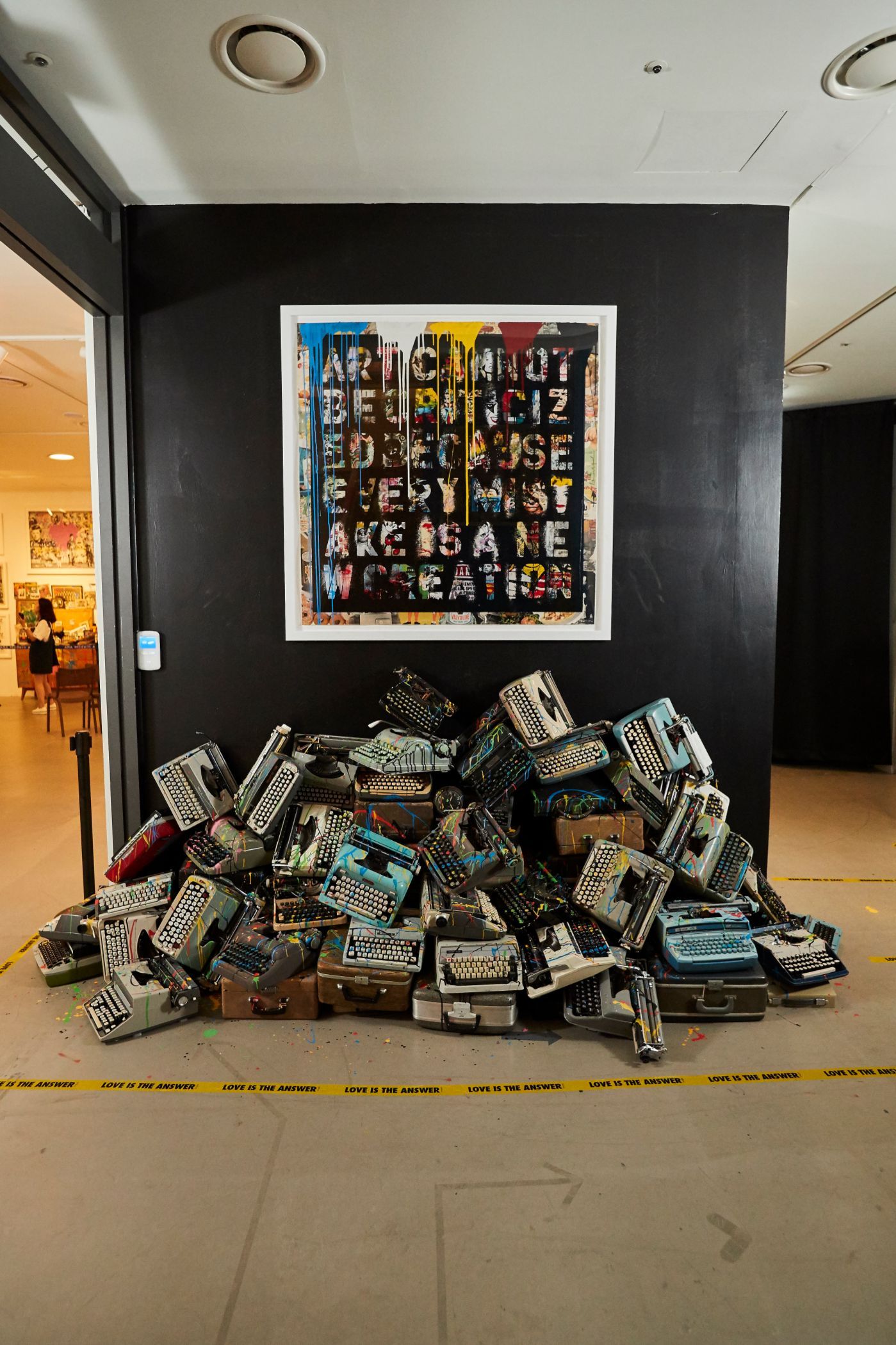 The appropriately named “Mr. Brainwash Art Museum” is the current pop-up exhibit in the once Paley Center of Media building, located at 465 North Beverly Drive in Beverly Hills. It is a must-see attraction for locals and tourists alike, whether already in love with the city or curious as to what the hype is all about. Predominantly displayed on the side of the museum is a larger-than-life image of a mask-wearing-Mona Lisa, a welcoming piece intended to remind viewers that life is beautiful even during unpredictable times. The Mr. Brainwash Art Museum represents a beacon of hope and positivity, signifying how things can still prosper through uncertainty.

When asked what superpower he would choose if he could have one, Mr. Brainwash simply answered, “To help people.” Isn’t that what all superheroes ultimately aspire to do anyway? Whether they can fly, regenerate or turn invisible, helping people is always the end goal. Superhero or not, Mr. Brainwash possesses one power which he always wields – the power of positivity. Mr. Brainwash hides in plain sight as Thierry Guetta. Just an everyday person, but the happiest person you will ever meet. And his mission is to help spread that happiness as far and often as he can.

In 2010, Thierry Guetta accepted the award for Best Documentary at the Independent Spirit Awards for his film Exit Through the Gift Shop. Ever since then, he has been in high demand as an artist, designer, motivator and exhibitionist. In his opinion, however, this newfound fame was never really in the cards. At least not on the surface.

Thierry was born in 1966, in Garges-les-Gonesse, France; the small, impoverished suburbs about half an hour outside Paris. As the youngest of five children, he and his siblings didn’t have much money or many material possessions, but Thierry found wealth and contentment in the love of his family. At age nine, the unforeseen death of his mother changed his perspective on life – but not for the worse. Instead, it forged Thierry, his siblings and father together on a mission to better their circumstances. They eventually found their way to America, and the City of Angels became Thierry’s new home. Rather than chasing dreams of fame and fortune, the Guetta family arrived simply looking for a fresh start.

At age 15, barely able to speak English, Thierry struggled in school. However, he seemed to excel everywhere else. Thierry discovered that his lust for life was an oddity among the people of Los Angeles, a breath of fresh air amidst the cynicism, vanity and despair. With this boost of confidence, Thierry tried his hand at the Hollywood nightclub scene. Success. He then ventured into vintage retail. Success again. His apparent sixth sense for what was “cool” in Hollywood garnered him a substantial amount of wealth, something he never had growing up. He later got married and had a son. A seemingly happy ending, yet this was only the beginning of Thierry’s story. Thierry’s alter-ego, Mr. Brainwash, would soon make his debut. 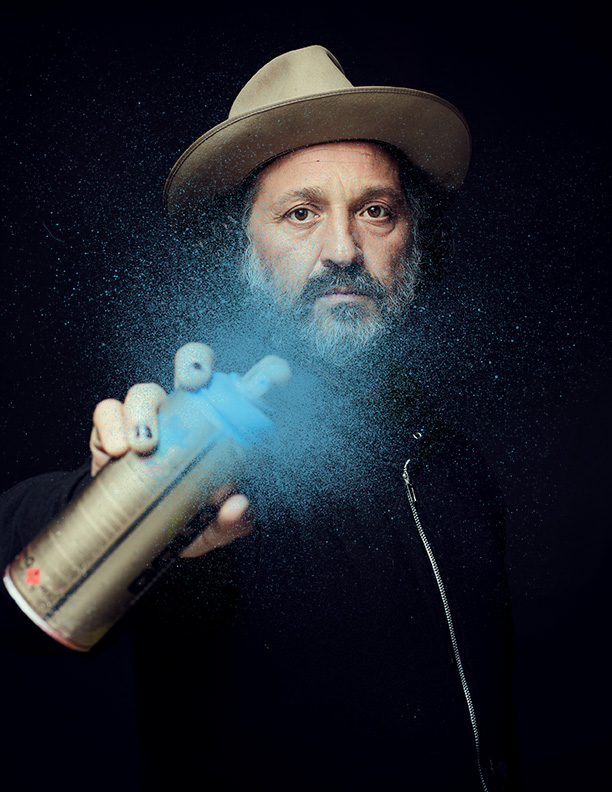 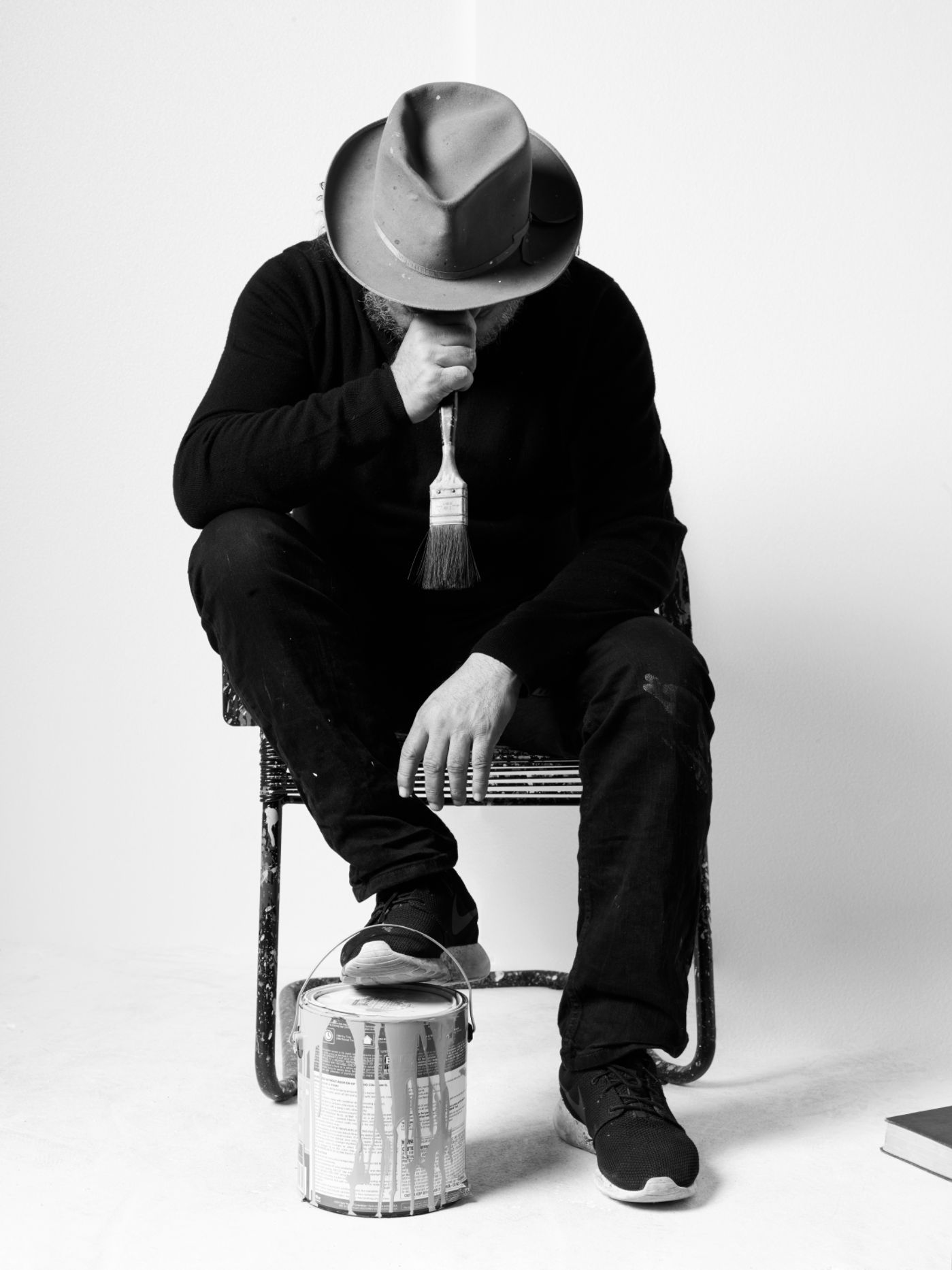 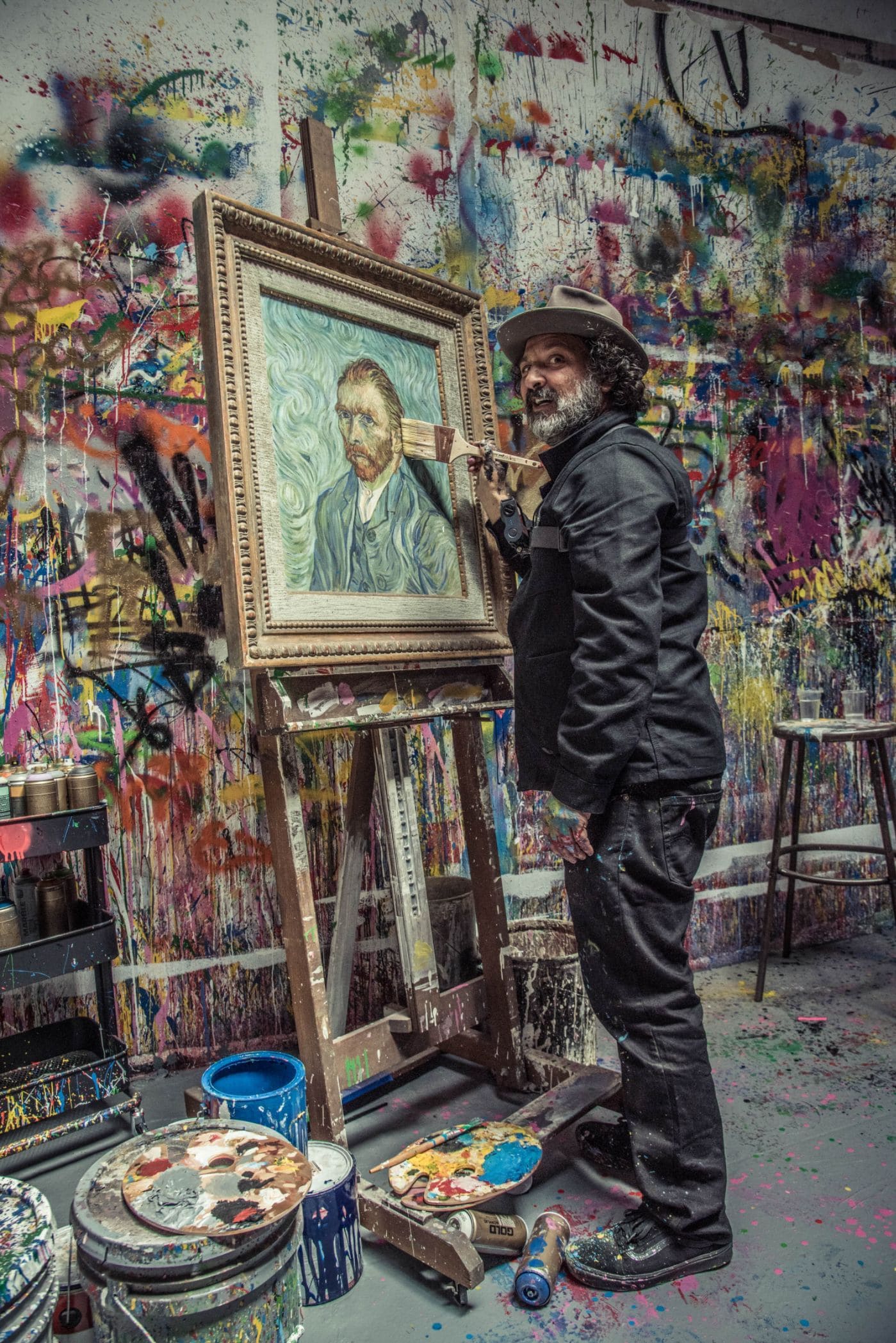 Losing his mother left a void which Thierry never seemed to be able to fill, until the birth of his son. To make sure and preserve every, single, precious moment, Thierry videotaped everything. Not “everything” like how most doting parents film all the big moments in their child’s life. Thierry videotaped every. single. possible. thing. Thousands upon thousands of hours of footage. His arm became an actual tripod, and soon all his experiences existed solely through the viewfinder of his camcorder.

“Life is a number of things,” Mr. Brainwash later declared, “from beautiful to tough and complicated, to funny and surprising, and everything in between.” Through a beautiful twist of fate and fortune, Thierry took a trip to Paris to visit his cousin – a street artist known as Space Invader. Thierry became infatuated with this artistic lifestyle and quickly focused his camera on Space Invader’s elicit work. Slowly but surely, the seed of Mr. Brainwash began to grow.

Thierry became addicted. He eagerly sought out other street artists to film, including Shepard Fairey, Zevs, and the elusive, infamous Banksy. What these artists didn’t realize was that Thierry wasn’t just their documentarian, he was their pupil. Thierry would later emulate everything he absorbed, adapting it all into his own vision – meshing the obscurity of street art with famous images of popular culture and historical figures. In with the new and with the old.

Thierry was encouraged (almost as a dare by Banksy) to put on his own art show, and finally Mr. Brainwash grew to fruition. Thierry swapped out his camera for a paint brush and narrowed his wandering eye to a dead-set stare on the task in front of him – becoming a legitimate artist. This journey makes up the plot of the aforementioned award-winning documentary Exit Through the Gift Shop.

The film came together almost by accident. Thierry possessed more than 30,000 collective hours of footage of all street artists involved. He only acquired access to these artists with the promise of a movie that would tell their story to the world. Unbeknownst to them, Thierry had no idea how to complete this movie and recording the footage was really all he had intended to do. Banksy ultimately intervened, suggesting focusing the movie on Thierry’s own story – entrepreneur turned compulsive videographer turned aspiring artist. And with that advice, Thierry immediately stepped into the spotlight. 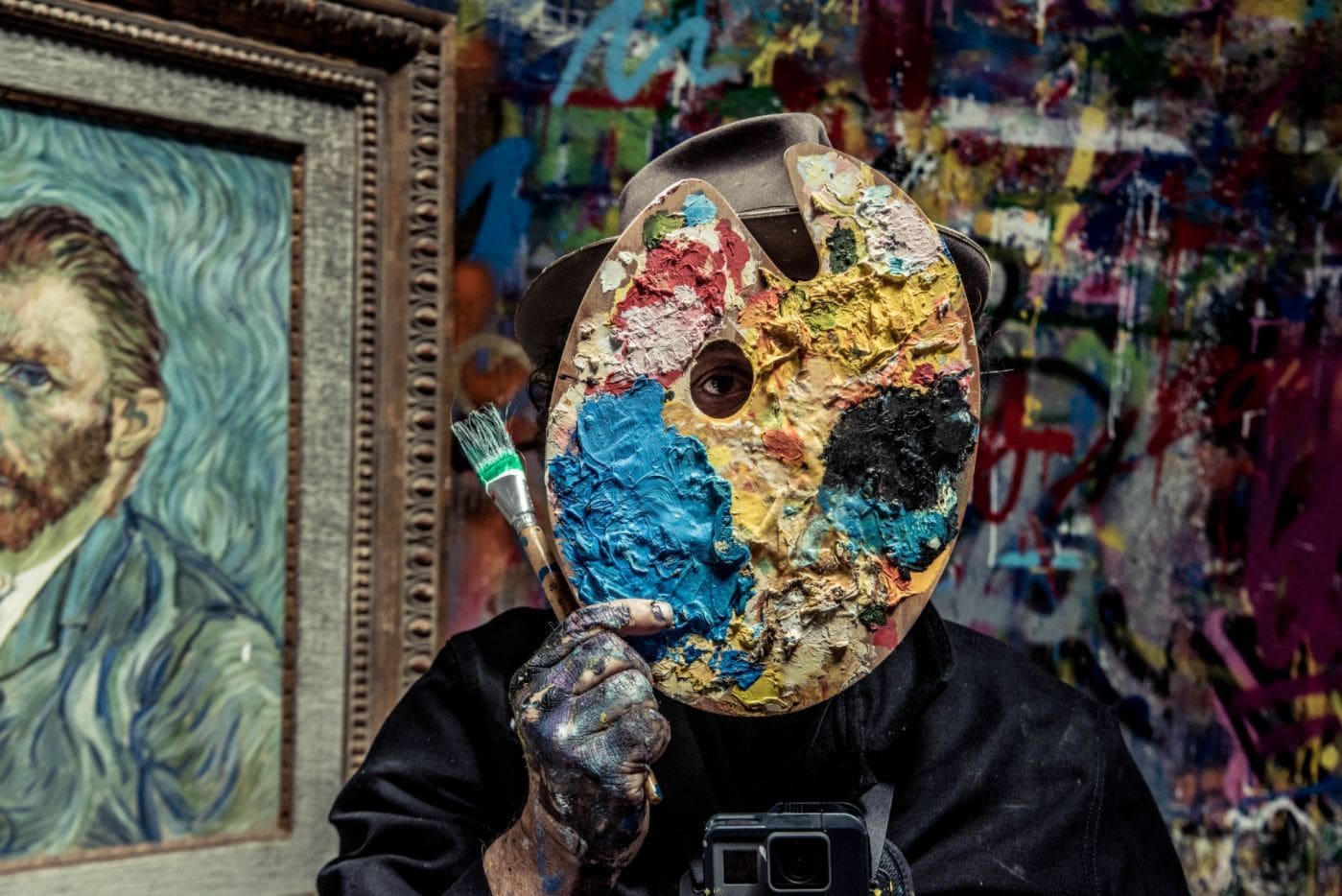 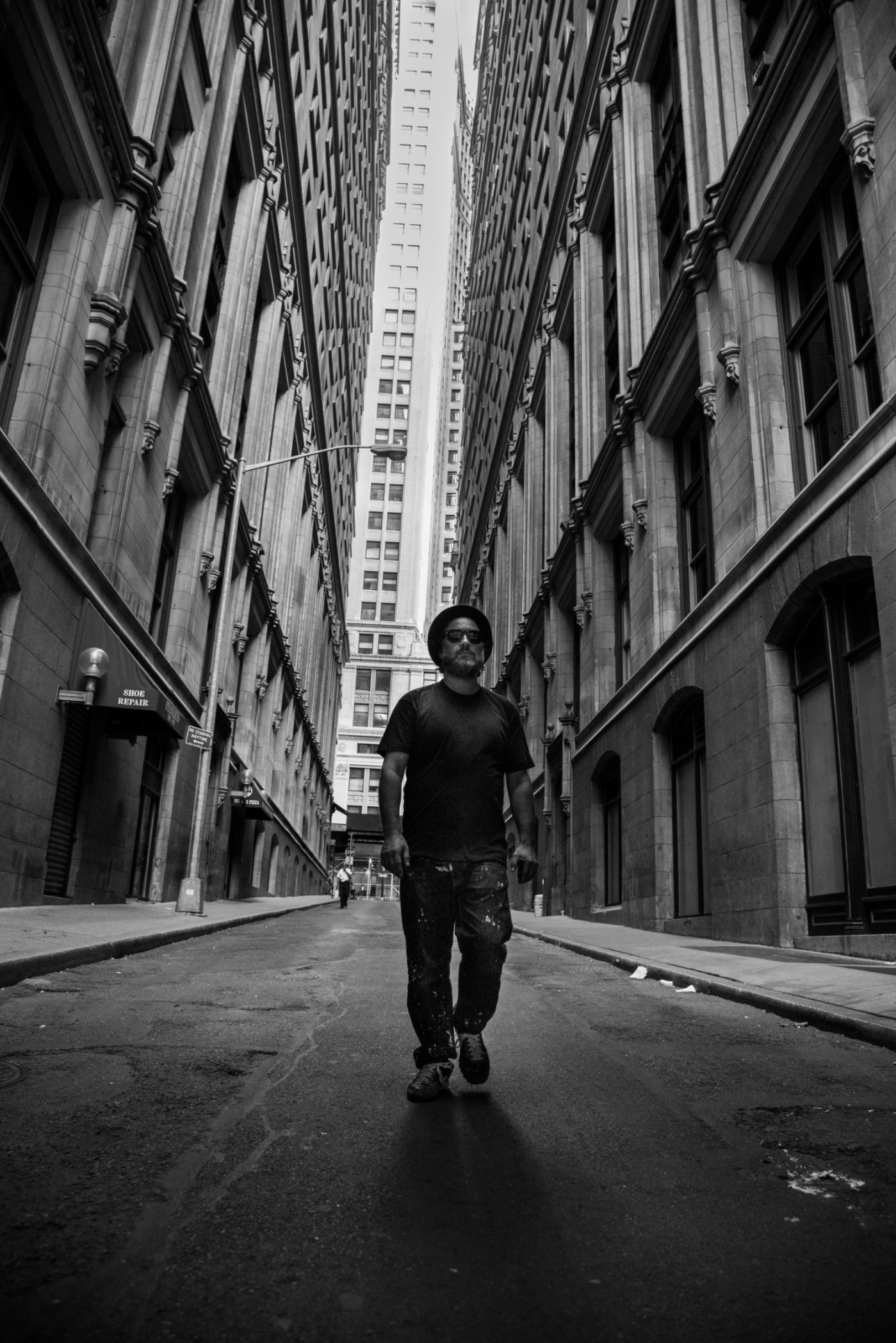 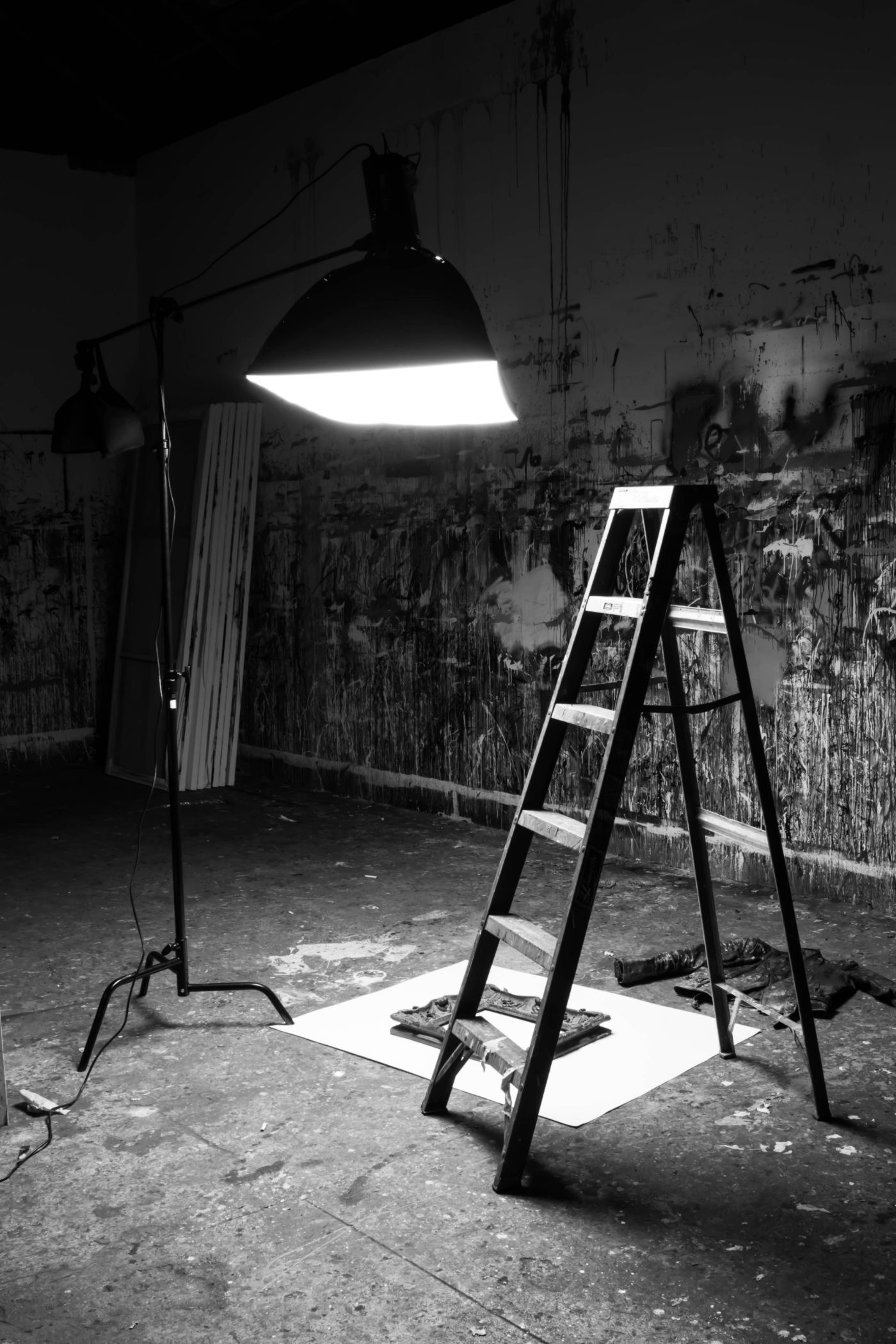 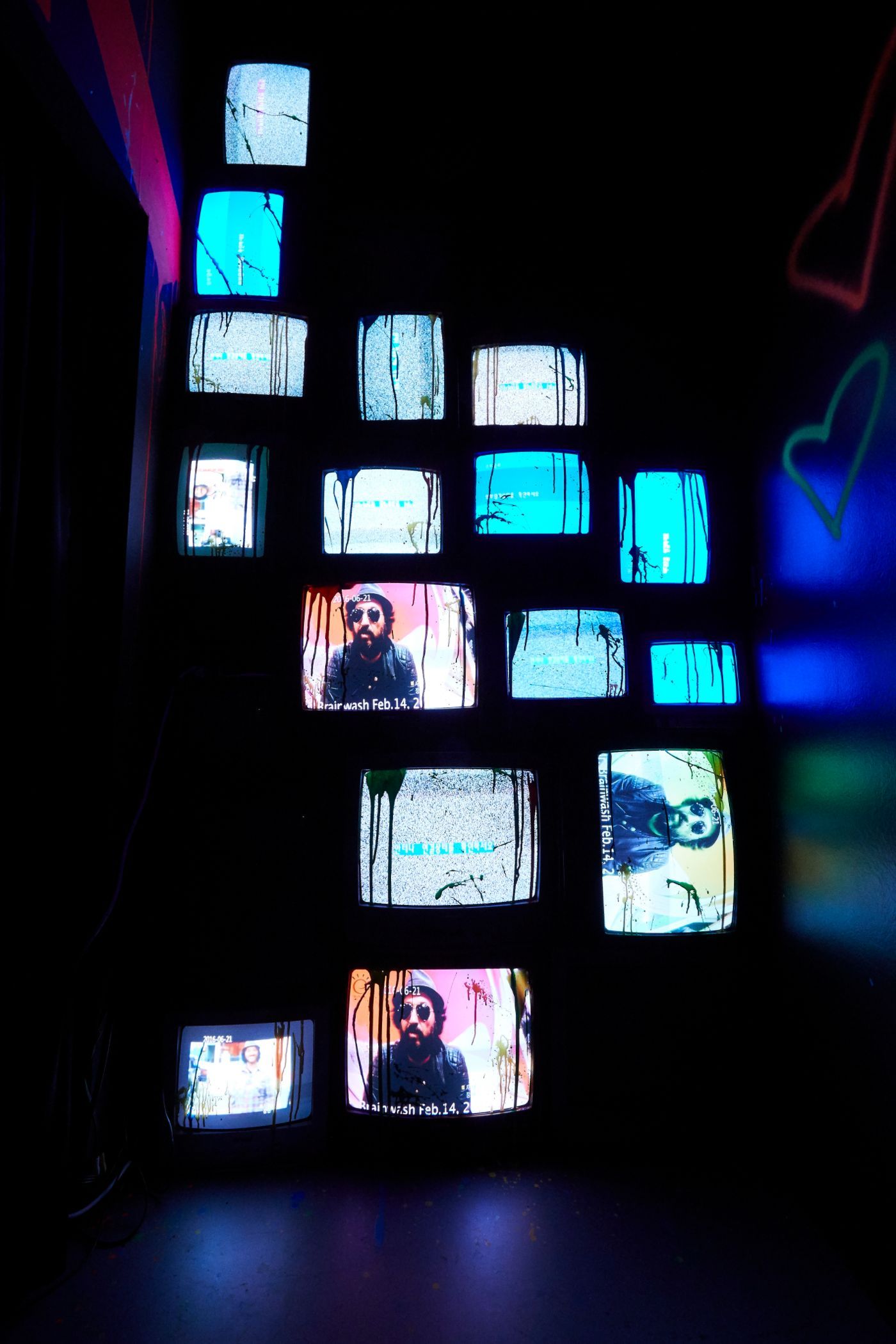 Mr. Brainwash’s hyper-visual explosion into the art world was unprecedented. His 2008 debut exhibit in Los Angeles, entitled “Life is Beautiful,” proved him to be an artist with strong intent and vision. It accrued more success in one show than most artists receive in their entire careers.

When Exit Through the Gift Shop premiered at the 2010 Sundance Film Festival, Mr. Brainwash already had gained celebrity. The documentary earned multiple awards, as well as the prestigious nomination for Best Documentary at the Academy Awards. With such notoriety, it was only a matter of time before stars began requesting commissions from Thierry. Michael Jackson, the Red Hot Chili Peppers, Rick Ross, KYGO, and even Madonna (to name a few) inquired about purchasing his art or having him create original album covers for them. In 2014, Mr. Brainwash created a poster for Michael Jackson’s posthumous album Xscape. This was a memorable full-circle moment for Thierry since Jackson was one of the first people to purchase an original Mr. Brainwash piece.

Mr. Brainwash remains one of the most prolific modern-day artists, continually spreading his contagious positivity across the world, from New York City to Miami to London to Cape Town all the way to Nuremberg. Most recently, Mr. Brainwash was commissioned by Warner Bros. to create a pop-up advertising campaign for their release of Space Jam: A New Legacy, which included life-sized statues of LeBron James and Bugs Bunny. 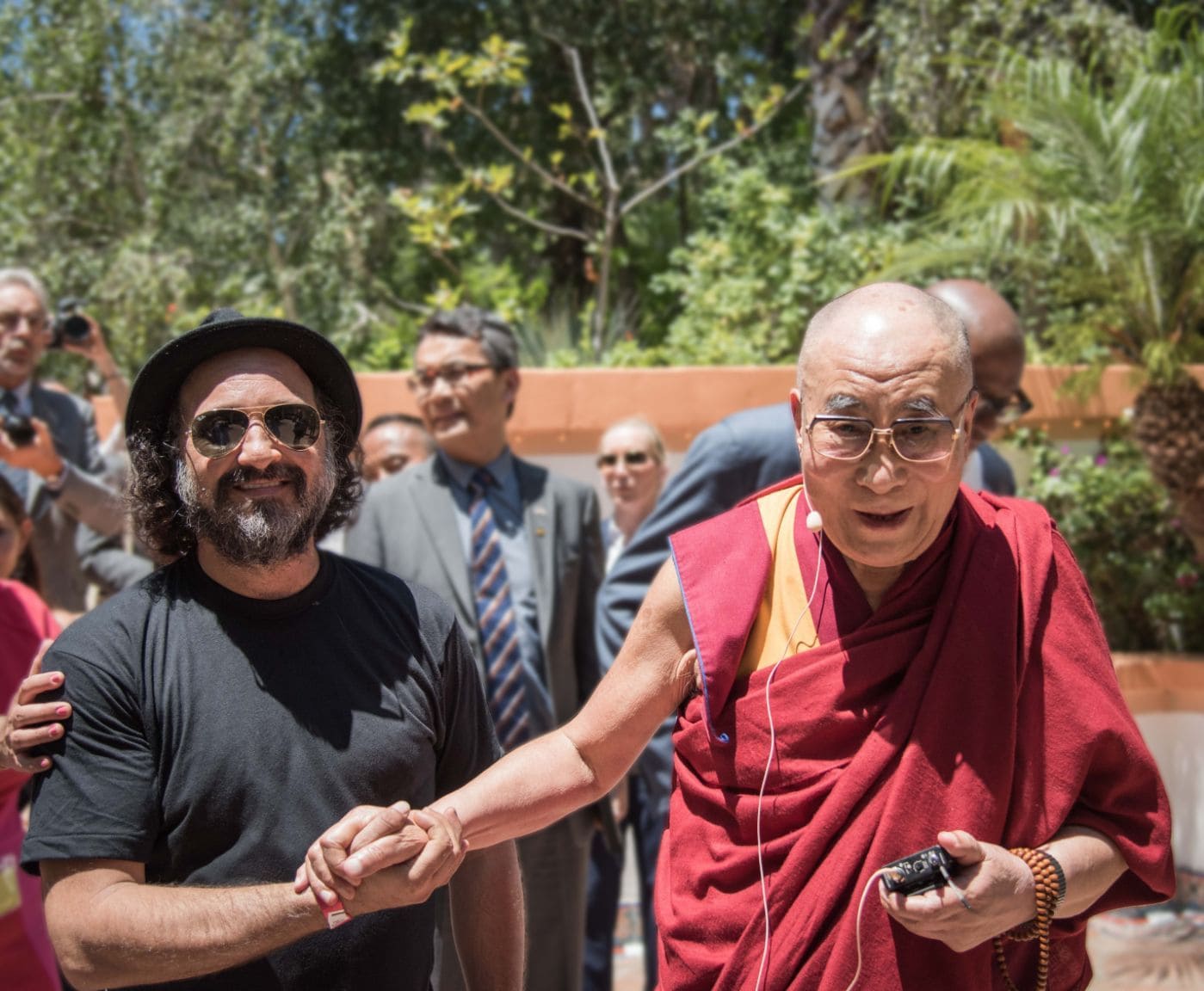 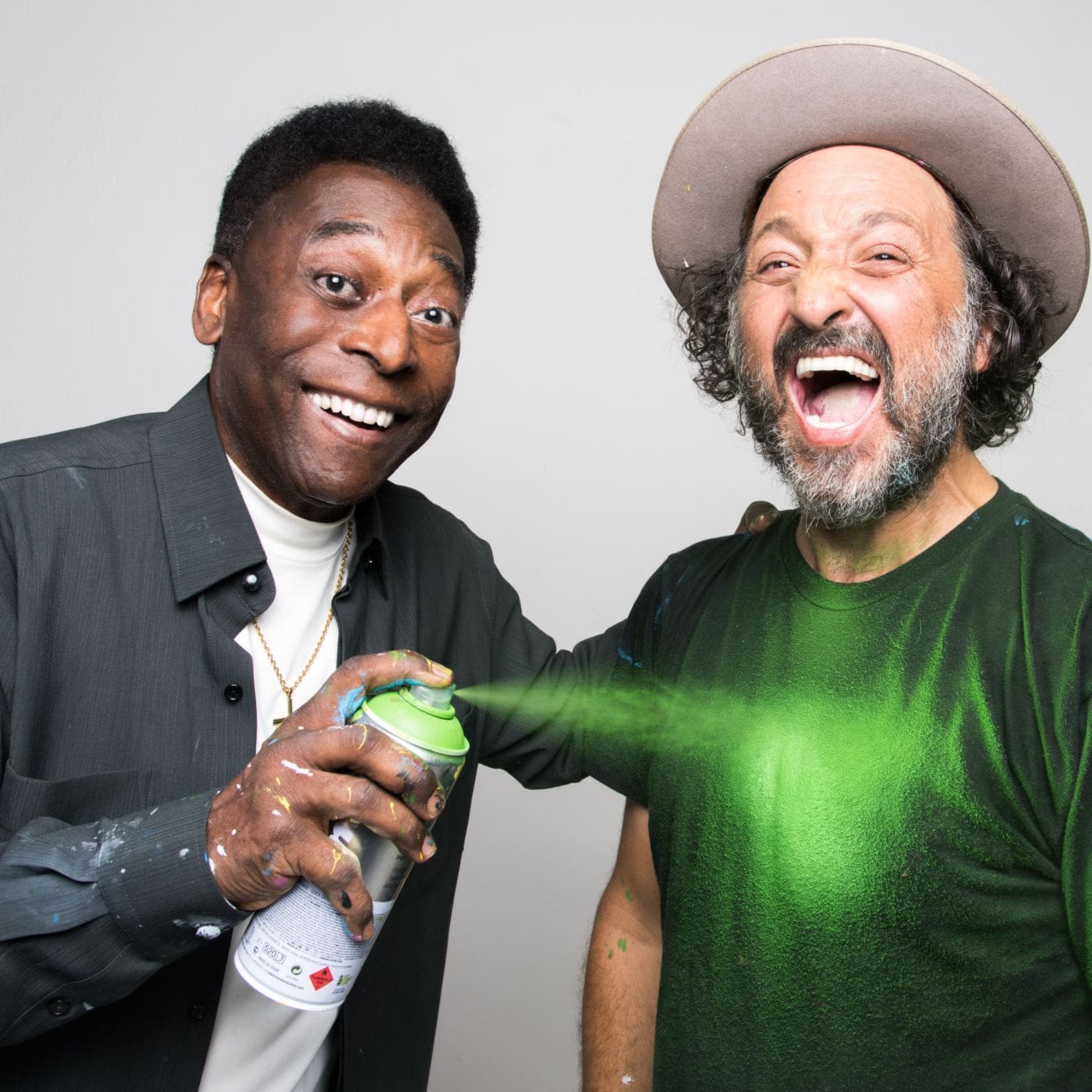 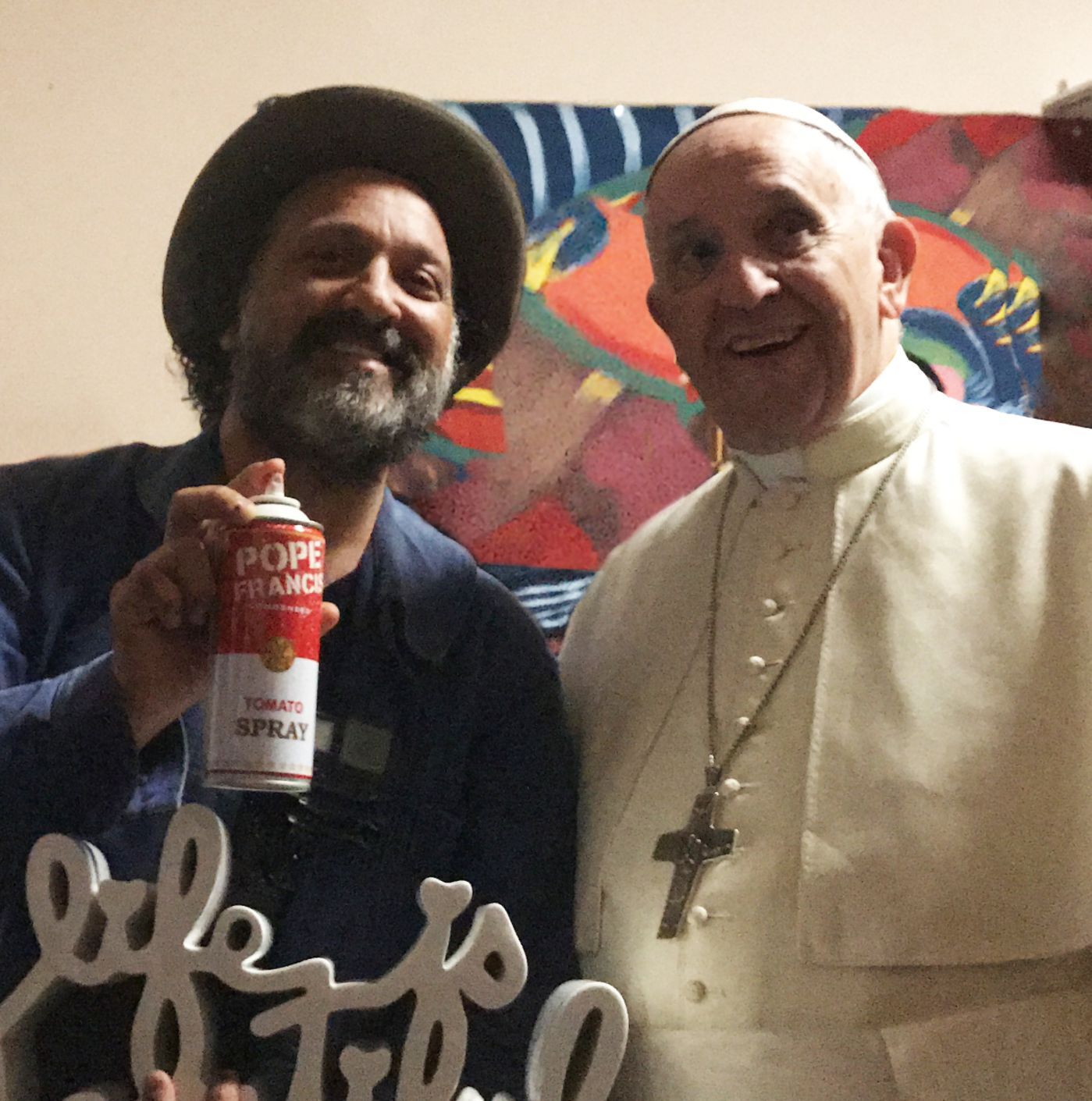 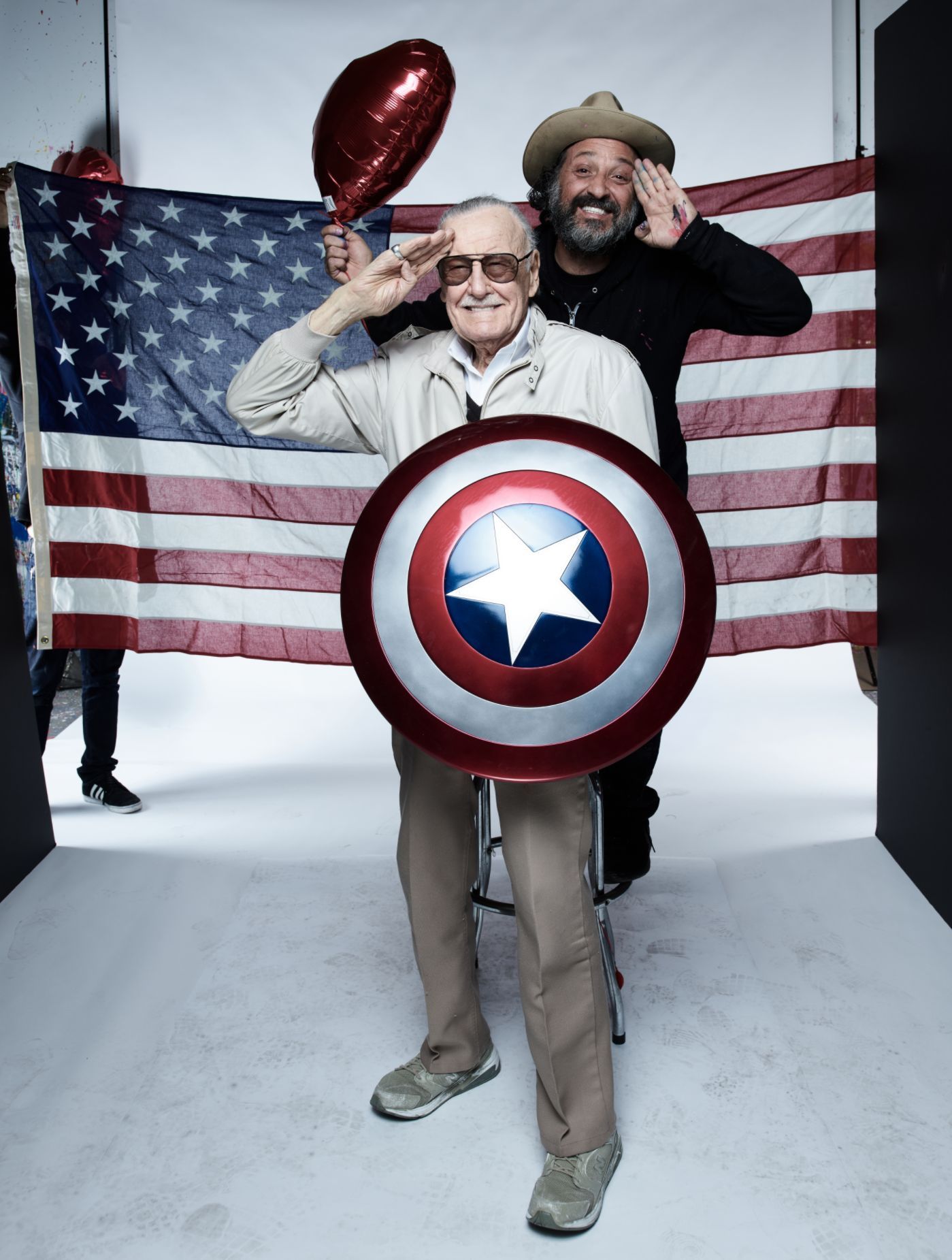